Yoga in the Tradition of Krishnamacharya

Krishnamacharya lived from 1888 until 1989. He was a master of philosophy and of yoga, and in the eyes of many, the greatest of the many great yogis of the twentieth century.  He was the teacher of many of those who brought yoga to the West – amongst them, Indra Devi, BKS Iyengar, Pattabhi Jois, and his own son, TKV Desikachar. Throughout his long life his teaching evolved as he brought his prodigious intellect to bear on the teachings he loved. The other major impetus for change was his constant desire to help anyone who came to him seeking help through yoga…as his students changed so did his teaching change. A consistent guiding principle for him was that yoga must be taught in a way that is appropriate to each individual student. This is perhaps why his different students taught in such very different ways.

Desikachar was the student who studied with him the longest, until the very end of Krishnamacharya’s life, and in these latter years Krishnamacharya and Desikachar applied yoga particularly in the field of healing. Desikachar established the Krishnamacharya Yoga Mandiram in Chennai, which still exists. Thousands of clients, suffering from all sorts of disease, have passed through its doors and been helped to a better quality of life. Desikachar, like his father, was an absolute master at giving the right practice for the right student, and indeed the tradition became known as Viniyoga, a Sanskrit word meaning ‘appropriate application’. He came to the West regularly and spread this teaching not only directly, but also through many books, one of which, ‘the Heart of Yoga’, has been acknowledged as a classic for many years. Sadly, Desikachar died in 2016.

Fortunately, the tradition of Viniyoga continues. Dr Kaustubha Desikachar (https://www.viniyoga.com.sg/who-is-kausthub-desikachar) is the son and student of TKV Desikachar. He began studying yoga when he was 9 years old and, after completing his dual masters degree at the University of Madras, became a full-time student and teacher of yoga. He teaches in India, where he is based, but usually all over the world as well. However, he has used this last year to very good effect, giving many online courses via Zoom, and doing a new translation and commentary of Patanjali’s Yoga Sutras. It is very good and can be obtained in the UK through me.

Like his father and grandfather, he is a master yoga therapist. He has trained many yoga teachers and therapists, and has written and co-written books on yoga, such as “The Heart of Asana: A comprehensive manual on Classical Yoga Postures”, a biography of his grandfather, called “The Yoga of the Yogi” and he has made a new translation of the Hathayogapradipika, which includes a full translation of the commentary Jyotsna. Like his father, he has the ability to present the ancient teachings in a way that is very profound as well as completely applicable for modern day practitioners. His teaching always emphasises the importance of the heart, as opposed to the mind. By the heart he does not mean the emotions, but that very deep voice within which tells us what is right for us to do

I especially like the integrity, profound knowledge and personal practice that lay behind the teaching of Krishnamacharya and Desikachar, and which is now just as evident in the teaching of Kausthub. 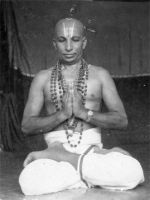 I am in Milborne St Andrew between Blandford Forum and Dorchester in Dorset. Click the Location button for a map and directions.
Location